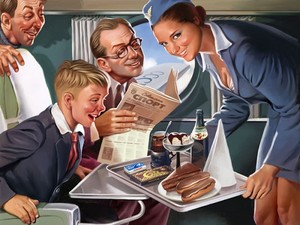 "Black men" video addressing separatists, Russian citizens with baseball bats and a large sum of money in a car at Izium checkpoint, "Antimaydan" protesters who demand to stop Antiterrorist Operation in Slov’yansk, Euromaydan Kharkiv Veche on May 4th, The Girl who burned a Ukrainian Flag on May 1st, The attack on “Radio Svoboda” journalists, Kharkiv Mayor Gennady Kernes’s condition, "Aeroflot" flights to Kharkiv cancelation

On Youtube the video was posted, where "black men" state that "separatists will disappear in Kharkiv region". According to them, for every "green man" there will be a "black man."

As reported previously, on the South-East of Ukraine the local population are actively forming the units of "black men", the patriotic fighters against invaders

Today the traffic police officers stopped the car, which was going from Donetsk region towards Kharkiv. On inspecting the vehicle, the law enforcers seized a large sum of money (two hundred thousand UAH) and baseball bats.

The driver and his female companion, the citizens of the Russian Federation, could not explain the presence of money and bats. The investigation group has left for the scene. The checking is going on, informs the press service of the Ministry of Internal Affairs of Ukraine.

About 150 "defenders of Kharkiv" and the representatives of "Borba" organization gathered for a rally on Freedom Square near the Lenin monument in order to demand to stop the antiterrorist operation in Slov’yansk in Donetsk region, writes "Radio Svoboda". The protesters are chanting "Kharkov - Russian city." They are holding the posters "Kharkiv against Junta", "Junta are war criminals", " Slov’yansk, we are with you."


Veche is to be held in Kharkiv, on May 4th at 15:00 on Constitution Square to support the anti-terrorist operation in eastern Ukraine, reports "Gorodskoy Dozor". The organizers are urging citizens to show the whole world that Kharkiv supports the unity of Ukraine.

Kharkiv Euromaydan demand from the country's leadership to publicly give the direct order to the military law enforcement officers to shoot to kill in case the troops of the aggressor are crossing the border.

The Girl who burned a Ukrainian Flag on May 1st Detained

Kharkiv law enforcers detained a 16-year-old woman who on May 1 was witnessed burning Ukrainian flag on Freedom Square. At the moment she is giving testimony to the investigating authorities.

On this incident the criminal proceedings have been opened under Part 1 of Art. 338 (abuse of state symbols) of the Criminal Code of Ukraine, the sanction of this article provides for up to 3 years' imprisonment.

The incident occurred at about 15:35 on May 1 next to the building of Kharkiv Regional State Administration. Near this place there were “Radio Svoboda" journalists who were providing video broadcasting.

The attack on “Radio Svoboda” journalists is under investigation in Kharkiv

The investigation into the attack on "Radio Svoboda" journalists in Kharkov has started, Evgeniy Bezborodov, Dzerzhinsky District Attorney, told Ukrinform.

"The information about the event was put in the Unified Register of pre-trial investigations under "deliberate impeding the professional activities of a journalist”. The circumstances of the criminal offense are being clarified "- said the attorney.

According to him, the sanction of Article provides for a fine up to 50 tax-free minimum incomes, arrest for up to six months, or imprisonment up to three years.

Kharkiv Mayor Gennady Kernes today was disconnected from the lungmotor. His condition is stable. This was reported by the deputy Mayor for Social Protection and Public Health Care Svetlana Gorbunova-Ruban. "He's breathing on his own. All vital parameters are stable. Threat to life has passed "

"Aeroflot" no longer flies to Kharkiv

"Aeroflot" cancels flights to Kharkiv due the absence of permission to enter the air zone of Ukraine, the company claims. This is reported by "RIA Novosti". "Passengers who booked for the flights SU1810 and SU1811, can return their tickets without penalties" the airline stated. 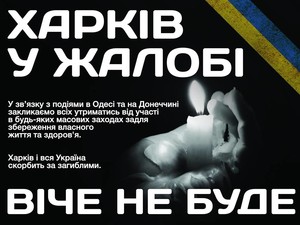 3 Days of Mourning in Kharkiv, Metalist Fans at Home, Russian "Aeroflot" all flights to Donetsk and Kharkiv cancelation, The action "We Are of the Same Blood@, Kharkiv Veche cancelation.